The Black and Mixed Ethnicity Presence in British Politics, 1750-1850 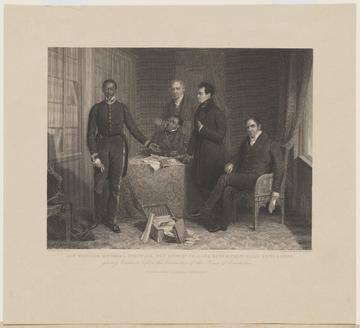 There is today a move to restore Black and mixed ethnicity (BME) people to their rightful place in British history. Historical attention has primarily focused on the narrative of slavery and abolition. Much has been written on the lives of Africans who migrated to Britain after escaping slavery such as Olaudah Equiano, Ignatius Sancho, Quobna Ottobah Cugoano and Mary Prince. The BME offspring of local slaves or indigenous women and British men in colonies such as the West Indies or India, who were brought ‘home’ to Britain, have also received some attention. The engagement of BME men in extra-parliamentary politics has been explored through the writings of Equiano and Cugoano on reform politics and the roles of Robert Wedderburn and William Davidson, and most recently Henry Redhead Yorke in extra parliamentary radical agitation. Yet few BME individuals have been identified in extra-parliamentary or formal British politics.

This doctoral thesis will aim to identify, quantify and analyse the BME presence in British politics and political culture more broadly, employing both quantitative and qualitative methodologies. It will potentially explore both houses of Parliament, constituency elections, local government and extra-parliamentary politics, to identify BME individuals, noting any fluidity between the sectors of engagement. In addition, the term ‘presence’ will include their methods of engagement with politics, ideas, influence and networks. The representations of and about such individuals by others and in the press may also be explored. Slave abolition will need to inform an element of the study, but it will not be the focus. In order to incorporate all relevant ethnicities the term BME will be defined with the doctoral student.

The project will explore a wide range of sources. The History of Parliament Trust is at the centre of parliamentary research and has close links with partner institutions such as the Parliamentary Archives. It also curates in-house digital collections that are not available elsewhere. It is recognised, however, that BME identities are often difficult to uncover in political archives. Other sources will also provide relevant material such as the Legacies of British Slave Ownership Database, the Cambridge Alumni Database, the ODNB, ECCO and the many digital newspaper sites.

The project will produce the first database of BME people in politics, combining knowledge already available with this project’s new research. A qualitative element is equally important to explore the data in more detail within both political and cultural contexts. For example, potential lines of enquiry include the significance of West Indian plantation ownership and related wealth to British politics and the Anglo-Indian presence in British politics. Also, the extent to which BME political families assimilated into British society and genealogical databases (such as ancestry.com or findmypast.com) may be used here. Other social network indicators such as education, club membership, religious affiliation, may also be explored to test processes of assimilation and generational engagement with politics.

The CDA is supervised by Dr Amanda Goodrich at the Open University, who has published widely on Georgian political ideas and political culture, particularly extra-parliamentary politics. Her recent book is the biography of an African/English dual heritage man from the West Indies who pursued a political career in Britain. It focuses on politics and identity in the Atlantic World. The student will also be supervised by Dr Robin Eagles at the History of Parliament, who is an expert on eighteenth-century politics and culture, in particular relating to the House of Lords, and his publications include an edition of the diaries of the radical MP John Wilkes.