Class, Art, and the Influences of British India: Bateman’s 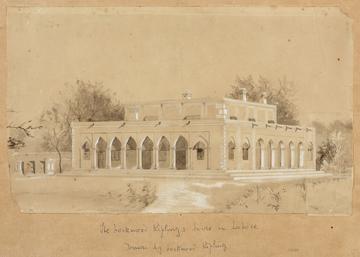 Rendering of the Lockwood Kiplings' house in Lahore by Baga Ram, ca. 1880

Open-Oxford-Cambridge AHRC DTP-funded Collaborative Doctoral Award at the University of Oxford, in partnership with the National Trust.

Bateman’s in East Sussex is a National Trust property where Rudyard Kipling and his family resided from 1902 until his death in 1936. As a late Victorian writer and poet, Kipling is an icon of British imperialism who wrote about the British Empire in a manner that often seems dated and provocative in the light of contemporary understandings of imperialism and ‘race’. His life and work are also deeply ingrained with issues related to class and society in Britain and India.

Examining Bateman’s and its collections through a historic and anthropological lens, this Collaborative Doctoral Award will consider the influences on Kipling as expressed through the house collections, and an understanding of the social contexts and conflicts that were prevalent during the end of the empire. It will explore the tastes, attitudes and socioeconomic disposition of the Kiplings in relation to British India and the material culture of Bateman’s.

Within this broad framework, the student will be encouraged to define their own doctoral research project in reference to the Bateman's collection of art, photographs, books and furniture. With global influences running throughout the space of the house and apparent in its textual, visual and material collections, this is a rich resource for examining colonial narratives. Particular areas of research could include: a detailed contextual knowledge of the Kiplings in British India; transnational and cultural connections between Britain and India; Kipling’s father the artist, teacher, and curator John Lockwood Kipling; British imperial family life; the effects of empire in both Britain and India; conceptualisations of British imperial identities; colonial collecting and display in the family home. Archives and collections at the British Library, Victoria and Albert Museums and the Kipling papers at the University of Sussex could also be explored to support this project.

The resulting research will inform a range of public-facing National Trust outputs including guidebooks, on-site presentation, web content and volunteer training. Intersecting with the Trust’s ambitions to tell more inclusive histories about the places and collections in its care, the CDA has the potential to make an important contribution to an area of key strategic interest for the National Trust, and to shape how the organisation presents and engages with the history of the place and its links to empire.

The CDA provides excellent opportunities for an applicant interested in wider questions of public history and heritage through the possibilities created by working with, and learning from, National Trust curators. Joining a growing cohort of doctoral students working with the National Trust, the successful candidate will be invited to workshops and other National Trust research events. They will also be offered training in object handling and the Trust's collections management system, and will be given the opportunity to learn about working with a range of audiences.

The principal supervisor for the project is Dr Yasmin Khan, University Lecturer in British History based in the Department for Continuing Education and a member of the History Faculty. The partner supervisor, Dr Christo Kefalas, is an experienced anthroplogist and curator.