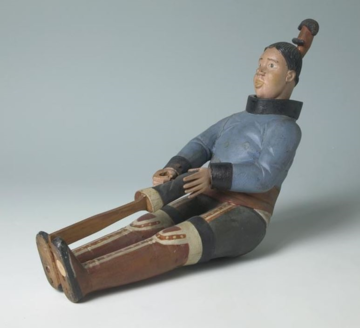 Model of an Inuit woman using a 'Kameo' to soften her sealskin boots, collected by Isobel Wylie Hutchison in Greenland.

Applications are invited for an Open-Oxford-Cambridge AHRC DTP-funded Collaborative Doctoral Award at the Scott Polar Research Institute (SPRI), University of Cambridge, in partnership with the Oxford University Museum of Natural History (OUMNH).

Narratives of Arctic travel and exploration typically focus on heroic exploits, tales of derring-do and, in many cases, terrible tragedy. The nineteenth century search for the Northwest Passage saw over 200 European expeditions travel to the Arctic. In these histories, indigenous people are often marginalised, as are accounts by women travellers. This project provides the opportunity to explore the stories of a range of women in the twentieth-century Arctic, including female scientists, travellers and collectors and their encounters with indigenous people. The project will start with Phyllis Wager and her sister-in-law, Kit, but will develop a comparative focus on other key actors, such as Isobel Wylie Hutchison.

Phyllis Wager spent significant time over-wintering in Greenland on the British East Greenland Expedition 1935-6. The expedition was led by her husband, Professor L.R. Wager, known as Bill. Among the expedition party was Dr H.G. Wager – the brother of L.R. – and his wife, as well as several Greenlandic people. Phyllis was described as being ‘responsible for all the domestic matters and sometimes assisting with the geological work’, while Kit Wager was credited as an ‘assistant botanist’. The Wager archive is based at the Oxford University Museum of Natural History (OUMNH) and provides a unique perspective into gender relations in Arctic field practice during the twentieth century.

Isobel Wylie Hutchison travelled independently in the Arctic in the 1920s and 1930s. She published widely and was a well-known public figure, appearing on the BBC as it boomed in popularity in its first decade. Hutchinson interacted with many people in the Arctic and provided many representations, as well as collecting material culture, which is now held in the collections of SPRI and National Museums Scotland.

These two contrasting examples offer an excellent starting point for this exploration of women scientists in the twentieth-century Arctic. The extensive collections of the OUMNH, SPRI and other organisations also provide further comparative examples. These histories complicate simplistic origin and identity stories for Arctic field science as an exclusively masculinist endeavour. They provide an opportunity to explore the different ways in which European travellers interacted with indigenous Arctic people, and the ways in which Arctic practices were shared with audiences – whether on lecture tours, broadcasts, scientific publications, or the collection of materials for museums. All these traces continue to influence understandings of the Arctic today.

The student will be part of a growing cohort of CDA students in both Cambridge and Oxford. The student will be able to work with direct access to the holdings of both the OUMNH and the SPRI, as well being able to draw upon the expertise of many leading researchers and practitioners within both universities. Such a level of access would prove much more difficult under conventional arrangements for doctoral research. The OUMNH will provide assistance in the access of the Wager collections, as well as helping with other assistance in Oxford. The student will be integrated into the archival and collections team at the OUMNH and SPRI, so will also have the opportunity to develop a practical understanding of the day-to-day operations of two major university museums. This will be a significant contribution to the skills and career development of the student and provide for further opportunities for collaboration.

Applicants should have a high 2.1 undergraduate degree (or equivalent) in Geography, History, History of Science, Gender Studies, Museum Studies, Anthropology, English/Comparative Literature or another cognate discipline, and will normally also possess a Masters degree or equivalent research training.