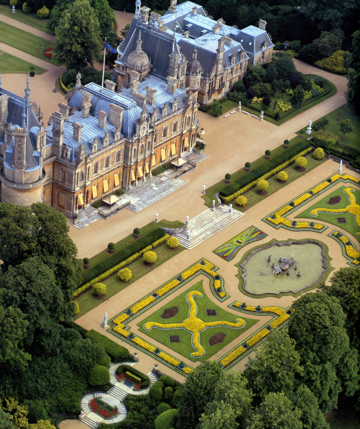 This project is a unique opportunity to explore themes around Jewish identity, subjectivity and material self-fashioning through the prism of a case study focused on Baron Ferdinand de Rothschild (1839-1898) of Waddesdon Manor, a Neo-French Renaissance château in Buckinghamshire renowned for its collections of art, books and ephemera and the only Rothschild house open to the public with its interiors and collections intact.

Born in Paris but raised in Frankfurt and Vienna, Ferdinand married his cousin Evelina de Rothschild and settled in England. Here, he built a career in public life as a politician (Liberal MP for Aylesbury, Sheriff of Buckinghamshire and a JP), a philanthropist (Treasurer of the Board of Guardians, Warden of the Central Synagogue, founder of the Evelina Hospital for Sick Children in London, supporter of Stepney Jewish Schools) and an amateur historian who sat on the advisory board for the 1887 Anglo-Jewish Exhibition. He was also a close friend of the Prince of Wales, for whom Waddesdon could almost be said to have served as an informal court.

Waddesdon Manor has been much studied, but Ferdinand de Rothschild – who built the house and established its collections – has attracted attention principally among historians of art and of collecting. Consequently, no in depth attempt has been made to situate Waddesdon and its collections in a Jewish history context. Yet the house and its rich archives, which include not just his published writings (Village Lectures, Personal Characteristics of French History) but his reminiscences, letters, journals, fictional writings (including a Gothic romance) and his account of a trip to South Africa, as well as miscellaneous documents offering opinions on subjects such as servants and women’s suffrage, provide a rich resource for a study of Jewish subjectivity and material-self-fashioning, that could be situated in a number of different historiographical contexts.  Further material will be available in other British and European archives.

This CDA is conceived within a wider, 4-year AHRC-funded collaborative research grant ‘Jewish Country Houses – Objects, Networks, People’ led by Professor Abigail Green from 2019 to 2023, which has a twin focus on ‘Jewish collecting and the art market’ and ‘Jewish politics and philanthropy’. Waddesdon Manor is a Project Partner in this project, and will be creating a digital edition of Ferdinand de Rothschild’s Reminiscences and other writings that will serve as a resource for researchers going forward.

Waddesdon is also taking the lead in developing a pan-European network of historic Jewish houses and collections, supported by the AEPJ and the National Trust. This broader context would help connect the student to a network of relevant scholars and researchers, for instance through the project conferences, and ensure the research project a range of outputs beyond the dissertation itself, possibly including contribution to museum documentation and interpretation, and writing aimed at the general public. The collaboration with Waddesdon will offer the student opportunities to engage with the work of a leading country house museum and, depending on the individual’s interests and curatorial activities at any one time, they will learn about the care and interpretation of buildings and works of art, the mounting of exhibitions, collections databases and the handling of works of art and archives. Additionally, the network of Jewish historic houses being established within the context of the AHRC framework opens up possibilities for highly relevant training placements at partner institutions in both the UK and continental Europe.