Applications are invited for an Open-Oxford-Cambridge AHRC DTP-funded Collaborative Doctoral Award at The University of Cambridge, in partnership with the National Trust. This fully-funded studentship is available from October 2022 and can be taken up on either a full or part-time basis. Further details about the value of an Open-Oxford-Cambridge AHRC DTP award are available on our Studentships page. 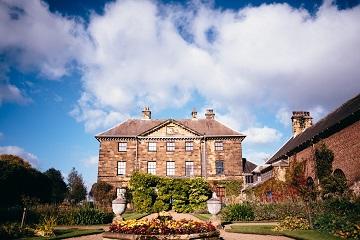 This project seeks to investigate the cultural significance of Ormesby Hall for the development of modern British theatre. In the 1930s and the 1940s, Ruth Pennyman, wife of the last owner of Ormesby Hall, herself a poet and playwright, promoted arts in the area and set up local drama groups. Ormesby Hall became known for its theatrical productions, including Michael Tippett's early and still unpublished opera Robin Hood (1934). Tippett worked with the Boosbeck and District Miners Choir and Cambridge University students who helped on productions of The Beggar’s Opera and Robin Hood.

Perhaps more significantly, Ormesby Hall became the base for Joan Littlewood's newly formed group Theatre Workshop, who lived and worked there for some eighteen months.  Significant collaborators include Ewan MacColl and Jean Newlove, but a host of other associated figures are important in the development of British theatre. Theatre Workshop's time at Ormesby Hall helped them pivot from the Theatre Union work of the 1930s towards the forms of popular theatre closely associated with Joan Littlewood's innovative conception of radical dramaturgy.

The material legacy surviving at Ormesby Hall includes various theatrical costumes, props and stage equipment of uncertain date and provenance. Other archives associated with Ormesby Hall include an extensive visitor book of all those who came through Ormesby Hall, including Neville Chamberlain (1937); a library that includes a collection of left-wing materials and playscripts, some of which are annotated but not properly studied; unedited manuscripts and materials left by Ruth Pennyman; and associated archives of letters.

This CDA project seeks to explore the critical significance of Ormesby Hall for British Theatre, notably in the development of Theatre Workshop, but more generally as an environment that nurtured different types of amateur and professional theatre.

Research questions could include:

(a) How might an understanding of theatre at Ormesby Hall change existing conceptions of the history and dramaturgy of British theatre?

A related question involves understanding how the development of emerging theatre dramaturgies related to Communist Party networks and socialist sympathies and aesthetics as they changed in the 1930s and 1940s.

(b) How did the political culture of the 1930s and 1940s shape the environment of Ormesby Hall and its impact on the development of Theatre Workshop.

(c) How might a better understanding of the role of women in mid-century British theatre practices inform new understandings of theatre and performance history?

Emerging from these questions is the wider significance of Ormesby Hall for reinterpreting the role of theatre history and performance across the National Trust's portfolio.

As well as helping to develop better understandings and representations of the theatrical, literary and political history of Ormesby Hall, this CDA has the potential to:

The research might generate new performances of materials associated with Ormesby Hall, and by extension, new ways of developing the performing arts within National Trust properties.

The lead supervisor for the project is Drew Milne, Judith E Wilson Professor in Poetics (English, Cambridge). His research interests are in comparative drama, poetry, and critical theory with an emphasis on modernism and its legacies in contemporary writing. His most recent work engages with writing and performance in relation to the ecology and environmental commitments of modern British theatre.

Jonathan Wallis, the National Trust supervisor, has over 30 years’ experience of working in museums and heritage, specialising in storytelling and communication history to wider audiences. The student will benefit from working directly with the Ormesby Hall Team, which includes a variety of heritage specialisms including: curatorial, conservation, visitor, and community engagement. They will also have access to the wider National Trust curatorial team and be invited to join weekly curatorial talks, lectures and seminars delivered for and by the Trust’s curatorial team.

There will be opportunities for the student to share their research and where appropriate trial engagement activity with National Trust staff, volunteers, partners, community groups and visitors, at Ormesby Hall, in the community and across the National Trust.

We invite applications from candidates from all backgrounds and ethnicities. Applicants with Master's-level training in the arts and humanities are encouraged to apply, with expertise in the fields of English, Drama, Theatre Studies, Modern and Public History particularly desirable, though the project is open to a range of possible research backgrounds and approaches. There will be considerable scope for the student to shape the focus of the thesis according to their strengths and interests.

Potential applicants are encouraged to contact Drew Milne (agm33@cam.ac.uk) with questions and for any guidance before submitting their application.