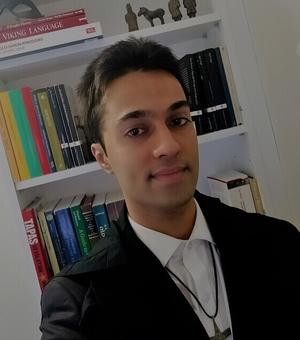 Ashley is an OOC AHRC DTP and Lincoln Kingsgate scholar at the University of Oxford. He is working towards a DPhil in English at Oxford after having completed an MPhil in Anglo-Saxon, Norse and Celtic at the University of Cambridge and a BA in English Literature and History at Durham University. Ashley specialises in medieval literature and languages, with a particular focus on Old Norse, Old English and Middle English literature. Much of his current work is in the field of human-animal studies, exploring the ways in which humans and animals interacted in the medieval period, and how these interactions and relationships are represented in literature. Ashley’s DPhil research, supervised by Dr Siân Grønlie at Oxford, explores the ways in which dogs became associated with death in medieval—Viking Age Scandinavia and beyond. It considers various aspects of this association, from mythological dogs guarding the gates of Hel(l) to beliefs about dogs as deadly omens, and seeks reasons for these associations within folklore, Christian and pre-Christian theology, and even modern scientific research on disease-detecting canines. This research further traces how these connections manifest across medieval Europe, and around the world today.