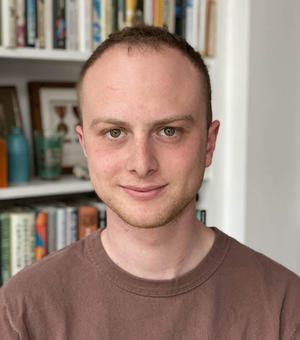 My doctoral research centres around the prose fiction of Anglo-Jewish writers at the end of the nineteenth century. I’m trying to explain these writers’ particular (and sometimes peculiar) narrative strategies by tracing how the narration of urban Jewishness developed across a five-decade period, stretching from Eliot’s 'Daniel Deronda' (1876) to Joyce’s 'Ulysses' (1922). One current key focus is thinking about how different ethico-political, philosophical, and legal ideas of Jewish movement helped or hindered the crafting of narrative techniques which sought to represent the Jew in motion. This aspect of the project is informed by my long-held interest in relating literary-critical methods to the work done by urban geographers and architectural historians.

My PhD is funded by the AHRC and the Isaac Newton Trust. Before starting this project, I completed a BA in English Language and Literature at Oxford and an MPhil in Criticism and Culture at Cambridge.