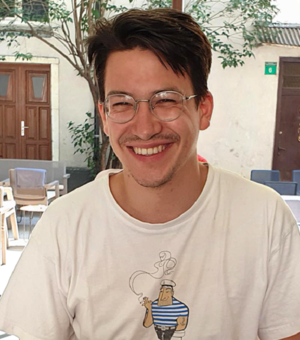 Hailing from Switzerland, I completed my BA in Russian and Serbian/Croatian at UCL SSEES with a semester abroad each at the University of Sarajevo and Novosibirsk State University. For postgraduate study, I then transferred to the University of Oxford, where I earned an MPhil in Linguistics, Philology and Phonetics. Throughout my studies, I have had a keen interest in language contact, especially in the context of marginalized and minoritised speech forms.

My DPhil research looks at a Vlashki/Zheyanski, or Istro-Romanian, a Romance variety spoken on the Istrian Peninsula, Croatia. Speakers are thought to be descended from Balkan Vlah shepherds who fled from the Ottoman invasion to the Adriatic coast in the 16th century. Through contact with Chakavian Croatian, as well as Venetian Italian, Vlashki/Zheyanski has several features that make it stand out quite distinctly from other Eastern Romance varieties. One of those features is concerned with the encoding of aspect in verb stems, which closely resembles the Slavic aspect system. In my thesis, I will employ corpus methods, as well as Klein’s theoretical work on verbal aspect to arrive at a detailed account of the feature in Vlashki/Zheyanski. Moreover, I hope to annotate part of Anthony Hurren’s recordings from the 1960’s which have been recently digitised by the ISTROX project at Oxford. As a critically endangered language, it is vital to archive and describe Vlashki/Zheyanski now, when this is still possible.

Other research interests include Queer linguistics, questions of language and nation, as well as the Balkan Sprachbund.