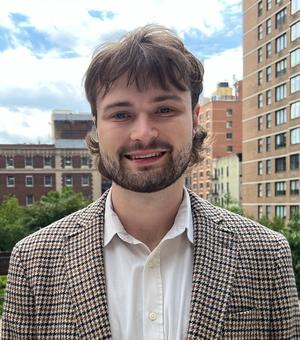 I am a PhD student in English at Corpus Christi College, Cambridge. My doctoral research, a collaborative project between Cambridge and The National Archives, focuses on the use of paper in late medieval England. In book history, the medieval period is usually thought of as the age of parchment, made from animal hides, as opposed to paper, made from plant matter. But by the fourteenth and fifteenth centuries, a wealth of paper was circulating in England—mostly in the form of legal and administrative documents, but also in books of Middle English poetry. With this in mind, my research centers on the little-studied National Archives KB145, an archive of legal records brought to the King’s Bench in London from inferior regional courts. By examining these bureaucratic documents alongside literary manuscripts, I aim to elucidate medieval paper’s role as an artistic medium and to build a fuller picture of the writing technologies of late medieval England.

Originally from Tallahassee, Florida, I received a BA in English from Yale University, where I was awarded the Edward Thompkins McLaughlin Scholarship Prize for Outstanding Work in the English Major. I then completed an MSt in English (650-1550) at St Cross College, Oxford, graduating with distinction. At Cambridge, I am supervised by Professor Orietta Da Rold (Faculty of English), Dr Suzanne Paul (Cambridge University Library), and Dr Euan Roger (The National Archives). My research is generously supported by the Open-Oxford-Cambridge AHRC DTP, the Cambridge Trust, and a University of Cambridge International Fee Bursary.