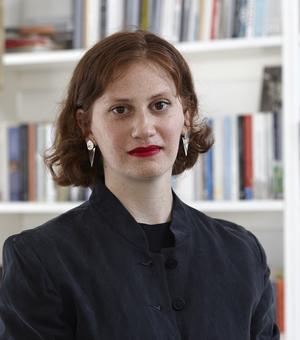 Natasha Gasparian is an art historian and curator who works on modern and contemporary art in the Arabic-speaking world. She is the author of Commitment in the Artistic Practice of Aref El-Rayess: The Changing of Horses (Anthem Press, 2020). Recently, she was a curatorial assistant to Sam Bardaouil and Till Fellrath for the 16th edition of the Lyon Biennale, as well as the managing editor of the biennale publications. Her art criticism has appeared in Artforum and Camera Austria, and in the publications of the Iraqi pavilion at the 58th Venice Biennale and the 16th Lyon Biennale. At Oxford, her doctoral research seeks to theorize the notion of an avant-garde in relation to politically committed, and decidedly anti-colonial, artistic practices in Beirut, Lebanon, after the Arab defeat of the 1967 Six-Day War. Treating the avant-garde negatively in relation to a singular modernity – and not as a predefined term with a set of positive criteria – her dissertation proposes to take seriously the asynchronous or anachronistic character of the avant-garde. Attentive to the intersections of, and the gaps between, politics and aesthetics during a heightened period of struggle between the 1967 war and the onset of the Lebanese Civil War (1975-1990), she presents a social history of an art geared toward an emancipatory politics.