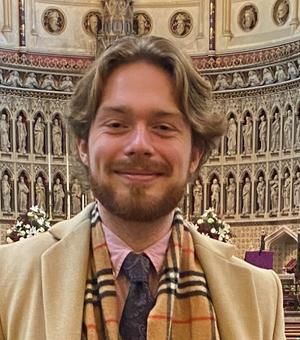 Oscar Davies Patton is an AHRC funded DPhil Student at Merton College, Oxford, researching the Chapel Royal under the reigns of Elizabeth I, and James I/VI. His research examines this under-explored aspect of the late-Tudor and early-Stuart court, with particular focus on royal ritual, liturgy, architecture, music, and sermons. These components will be examined to stress the importance of the Chapel Royal in the articulation of spiritual and temporal authority over court, church, and nation. This will allow for a fresh courtly perspective on historiographical debates over the formative years of the Church of England, such as the Elizabethan Religious ‘Settlement’, and the Jacobean balancing of proto-Laudianism and Calvinism both at court and on progress. Oscar completed his BA in History at the University of York in 2020, and his MSt in Early Modern History at Jesus College, Oxford, in 2021. His DPhil project is supervised by Dr Alexandra Gajda.