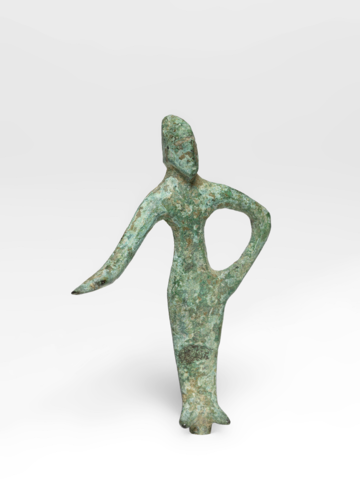 Italic bronze figurines - simple anthropomorphic and sometimes zoomorphic bronze figurines a few centimetres high, found in great numbers in upland central Italy - are some of the most frequent objects in European Museum collections. The aim of this project is to give new life to these enigmatic objects removed from their context, by providing comparative examples across Europe, fresh interpretations, added technical information on their manufacture and the insightful context of their use from excavated sanctuaries. The results will take our knowledge beyond the important catalogue of these objects published by Giovanni Colonna in 1970: Bronzi votivi umbro-sabellici a figura umana. I. periodo arcaico.

The principal supervisor (Betts) has extensive experience of the analysis of these upland sanctuaries (focused on Monte Primo in the Marche of eastern central Italy). The co-supervisor (Christophilopoulou) is a Mediterranean archaeologist with wide curatorial experience and a keen interest in material culture studies, currently leading a project on island identities in the Mediterranean, incorporating extensive metallurgical analysis. The student will be registered with the Open University, but part of a network that will include a commitment of detailed advice provided by Simon Stoddart (University of Cambridge), Charlotte Potts (University of Oxford), Philip Perkins (Open University) and Dan Hicks (University of Oxford).

Simon Stoddart has excavated and published similar figurines on Monte Ansciano above Gubbio. Charlotte Potts has written more widely about sanctuaries in central Italy. The network will provide integrated, reciprocal, intellectual stimulation from other students studying the similar themes, regions and period from the three universities and access to scholars in key museums in the UK (e.g British Museum) and Italy (e.g Perugia, Ancona and Villa Giulia) for comparative material. The Fitzwilliam Museum will also provide student training and support in technical and scientific analysis as needed to answer relevant research questions.