Shugborough Hall, the Ansons and the eighteenth-century Atlantic economy 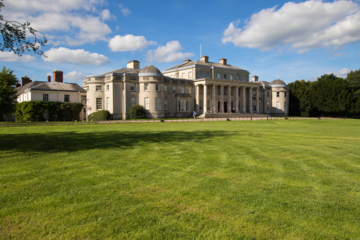 Shugborough Hall, like many English country houses, was extensively remodelled internally and externally during the course of the eighteenth century. Thomas Anson MP (1695-1793) was crucial for these changes, dramatically improving the parkland and enlarging the house, but much of the funding for these endeavours derived from his younger brother, George’s, naval career.

George Anson (1697-1762) joined the navy in 1712 and by the 1720s he was commanding vessels protecting British trade with the Carolinas. Anson’s involvement in colonial life was considerable – he was a well-known figure around Charleston and he enjoyed drinking and gambling. From 1726 onwards he invested his winnings in land, acquiring more than 12,000 acres in the Carolinas, including the suburb of Charleston that still bears his name, Ansonborough.

The Ansons were connected with a wider Atlantic economy in which slave labour was a crucial component. Initial research has not produced definitive evidence of the Ansons’ direct involvement in the slave trade. However, the family’s marital alliances and the compensation claims made following abolition in the nineteenth century attest to a broader connection with slavery.

This PhD project provides an opportunity to place Shugborough into a wider global network and explore the structures of consumption and exploitation that helped to create it. It can serve as a micro-historical case-study for the influence and domestic impact of imperialism, as well as contributing to wider discussions about the legacies of slavery and the profits that elite families derived from it.

Research questions that the project might explore include examining the typicality of connections with the slave trade for those developing landed estates in the eighteenth century; the web of social relationships that bound landed society together and the importance of capital, perhaps derived from slavery, for securing good marriages and social advancement; the domestic awareness of empire and its structures; the changing perceptions of landed estates and how best to represent their complex and entwined histories in the present.

This project would suit applicants with a strong interest in the history of Britain in the eighteenth century, perhaps with interests in global and maritime history or the history of race. It provides excellent opportunities for an applicant interested in wider questions of public history and heritage through the possibilities created by working with, and learning from, a network of National Trust curators. The studentship will provide access to the National Trust’s wider collections and the possibility of working with the Trust’s ‘Global Connections’ initiative in the Midlands. Ideally, this research will inform directly the ways in which these stories are conveyed Shugborough itself, as well as providing a model which other country houses could adopt for themselves.

In addition to the sources relating to the Anson family available in the British Library, the National Archives and other local collections, the house itself and the collections can reveal valuable insights into the material surroundings, colonial connections and financial decisions of the Anson family.

The CDA is based within Cambridge, with access to a range of scholars working on the Atlantic economy and the legacies of slavery. The supervisory team have particular expertise in material culture, public history, eighteenth-century elite society and global Britain.