The First History of Elizabethan England: The Making of William Camden’s Annals 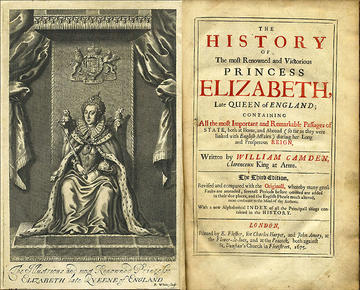 Open-Oxford-Cambridge AHRC DTP-funded Collaborative Doctoral Award at the University of Oxford in partnership with the British Library.

William Camden's Annales Rerum Anglicarum et Hibernicarum Regnante Elizabetha (commonly known as Camden's Annals) is one of the most valuable yet neglected sources on early modern Britain. Written in Latin and first published in two parts in 1615 and 1625, the Annals is the earliest full-scale history of Elizabeth I's reign and hailed as a landmark in the development of English historical writing. The work was arguably the single most important source in shaping the image of Elizabeth and her reign, creating a myth of Elizabeth as a Protestant heroine in the 17th century and influencing the interpretations of countless historians through succeeding centuries and into the present day. Many of what are taken to be Elizabeth's own words are derived from Camden's paraphrases, and he established the reputations of leading figures of the period. The Annals also contains extensive material on events in Scotland and Ireland, as well as on European history, the British Reformations, social and economic issues, parliament and government, military affairs and exploration. Yet the Annals has long been neglected, and crucial questions about its creation remain poorly understood, perhaps most importantly the authorship and process of creating the work. This is not for want of evidence: two largely complete drafts of the text exist in the British Library’s Cotton manuscripts, and there is extensive correspondence and other papers at the Bodleian Library, the British Library and elsewhere.

This doctoral project will be the first comprehensive study of the making of Camden's Annals. The focus of the thesis will initially centre on the Cotton manuscript drafts (Faustina I-X), held at the British Library. The award holder would carry out a thorough study of the manuscripts, with the intent of producing an assessment of the authorship of the Annals, looking at the drafting process and identifying the scribes involved and the existing corrections and additions in other scholars’ hands. The project will open up many avenues of research into the intellectual and political culture of the sixteenth century: to antiquarian and historical study, scholarly networks, and to the formation of the Cotton manuscripts in the British Library, one of the most important archival collections in Britain and recently entered UNESCO Memory of the World UK Register in 2018.

The project represents a unique collaboration between the University of Oxford, the Open University, and the British Library. The award holder will be based in Oxford, and will be supervised by Dr Alexandra Gajda and Dr Neil Younger, experts in Elizabethan political and intellectual history and Julian Harrison and Dr Andrea Clarke, Lead Curators of pre-1600 and Medieval and Early Modern Manuscripts at the British Library.

The student will also become part of a thriving community of historians working on early modern history at Oxford and will enjoy access to the Bodleian Library, one of the foremost research libraries in the world, also home to a sizeable number of additional manuscripts relating to Camden’s Annals. They will attend the core seminars on early modern British history and will have the opportunity to attend specific seminars relevant to their field in early modern intellectual history, historiography and literature and history. Additionally, the student would be encouraged to attend events at the Open University and the Institute of Historical Research, where Dr Younger is a convenor of the Tudor and Stuart History Seminar.

The student will also be based at the British Library for a significant proportion of the studentship, where they will have a dedicated workspace, access to office equipment and services, and privileged staff-level access to the manuscripts collections, learning more about curatorial activities and the wider collection. The British Library is the national library of the United Kingdom. Its collections encompass many fields of knowledge and a wide range of formats in hundreds of languages, covering 3500 years from some of the earliest written records to the digital collections of the present day. The Library is actively involved in a range of collaborative doctoral research programmes across several disciplines and provides a broad range of professional development opportunities for doctoral students.