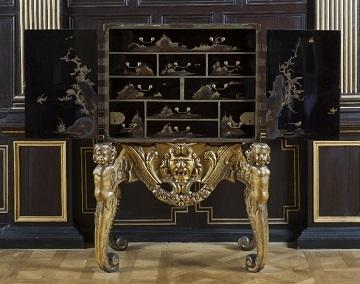 Japanese lacquer cabinet on a Dutch gilt stand, c.1630-50, in the Long Gallery at Ham House, Richmond-upon-Thames. The gilt stand has legs in the form of elephants' trunks, with winged putti.

Non-European influences permeated baroque-style interior decoration in the late 17th and early 18th centuries. The collection at the National Trust’s Ham House is a rare example of an associated group of relatively well-documented objects surviving from this phase of British taste. With many items collected by Elizabeth Murray, Duchess of Lauderdale (c. 1626-98) and John Maitland, Duke of Lauderdale (1616-82), the collection at Ham House illustrates the breadth and quality of this trend.

Although the Asian influence on European interiors has long been recognised, we are only gradually acquiring a better understanding of the trade and production networks that enabled this early-modern globalism to thrive. The collection at Ham House includes genuine Asian items (from China, India, Japan, and – probably – South East Asia), made of ivory, lacquer and porcelain. Many of these were made for European markets, but some may originally have been made for domestic consumption. The collection also includes Asian items that were adapted in Europe; items made in Europe in imitation of Asian items, and imitation Asian objects made in European colonies. Original inventories from the 1670s and 1680s often refer to anything Asian as ‘Indian’, illustrating an imprecise European knowledge of Asia at that time. The Asian-influenced interiors at Ham House provide evidence about the global trade networks of the late 17th century and the way objects produced outside Europe were used and fitted into the contemporary English world view, as well as the reciprocal view from other parts of the world towards European consumers. Further research through this project will improve the understanding of this collection and of early-modern world views and networks.

Potential research questions and areas of research might include:

Within this broad framework, the student will be encouraged to define their own doctoral research project in reference to the collection at Ham House. The resulting research will inform a range of public-facing National Trust outputs including guidebooks, on-site presentation, web content and volunteer training. Intersecting with the Trust’s ambitions to tell more diverse histories about the places and collections in its care, the project has the potential to make an important contribution to an area of key strategic interest for the National Trust, and to shape how the organisation presents and engages with the history of its places and collections. Joining a growing cohort of doctoral students working with the National Trust, the successful candidate will be offered training in object handling and the Trust's collections management system and will be given the opportunity to learn about working with a range of audiences. There will be opportunities for the student to share their research with National Trust staff, volunteers, partners, community groups, and visitors at Ham House, in the community, and across the National Trust.

The lead supervisor for the project is Dr Amy Jane Barnes, Lecturer and Staff Tutor in Art History in the Faculty of Arts and Social Sciences at The Open University. Her research looks at how objects from Asia, particularly those from China, have been collected, interpreted and displayed in British museums and collections.

The National Trust supervisor, Dr Hannah Mawdsley, is Property Curator for the National Trust’s Ham House and Garden, a 17th century mansion on the banks of the River Thames in Richmond, London. She is particularly interested in how cultural history and collections intersect.

We warmly invite applications from candidates from all backgrounds and ethnicities. Applicants with masters-level training or demonstrable experience in the arts and humanities are encouraged to apply, with the fields of material and visual culture and/or cultural history particularly desirable. There will be considerable scope for the student to shape the focus of the thesis according to their strengths and interests. Applicants should meet the eligibility criteria for Open-Oxford-Cambridge AHRC studentships.

Please visit the OU pages about ‘Research Degrees in Art History’ and the Faculty's page on Postgraduate Research for guidance on how to apply for a PhD. Potential applicants are encouraged to contact Amy Jane Barnes (amy.barnes@open.ac.uk) with questions and for any guidance before submitting their application.

You should apply to the PhD in Art History by midday (UK time) 11 January 2022, indicate your interest in being considered for an Open-Oxford-Cambridge AHRC DTP studentship and submit a completed copy of the OOC DTP Application Form at the same time. Further details on how to apply for OOC DTP studentship funding is available on our How to Apply page.